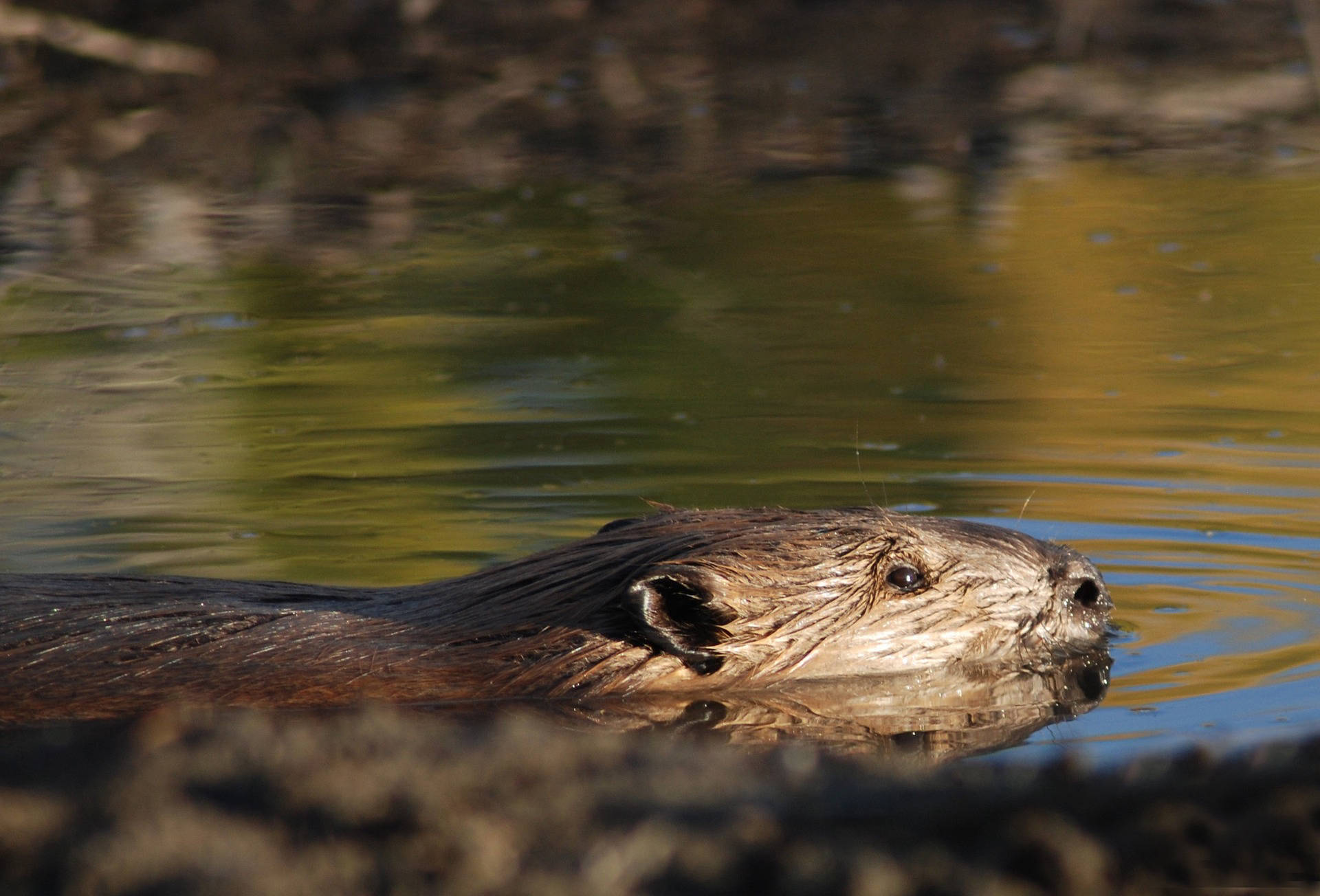 The beaver, the second largest rodent in the world, is well-known for its wide, flat tail, used for slapping the surface of the water to warn other beavers of approaching danger. Trees provide a beaver's favorite winter food — bark and leaves. In summer other vegetation, especially aquatic plants, make up their diet. Many that have not seen a beaver will often mistake a groundhog for a beaver living under thier shed or deck.

Beavers are known for their natural trait of building dams on rivers and streams, and building their homes (known as "lodges") in the resulting pond. Beavers also build canals to float build materials that are difficult to haul over land. They use powerful front teeth to cut trees and plants that they use for building and for food. In the absence of existing ponds, beavers must construct dams before building their lodges. First they place vertical poles, then fill between the poles with a crisscross of horizontally placed branches. They fill in the gaps between the branches with a combination of weeds and mud until the dam impounds sufficient water to surround the lodge.

They are known for their alarm signal: when startled or frightened, a swimming beaver will rapidly dive while forcefully slapping the water with its broad tail, audible over great distances above and below water. This serves as a warning to beavers in the area. Once a beaver has sounded the alarm, nearby beavers dive and may not reemerge for some time. Beavers are slow on land, but are good swimmers that can stay under water for as long as 20 minutes.

Beavers do not hibernate, but store sticks and logs in a pile in their ponds, eating the underbark. Some of the pile is generally above water and accumulates snow in the winter. This insulation of snow often keeps the water from freezing in and around the food pile, providing a location where beavers can breathe when outside their lodge.

The North American beaver's preferred food is the water-lily (Nuphar luteum), which bears a resemblance to a cabbage-stalk, and grows at the bottom of lakes and rivers.[9] Beavers also gnaw the bark of birch, poplar, and willow trees; but during the summer a more varied herbage, with the addition of berries, is consumed. These animals are often trapped for their fur. During the early 19th century, trapping eliminated this animal from large portions of its original range. However, through trap and transfer and habitat conservation it made a nearly complete recovery by the 1940s. Beaver reintroduction in British Columbia was facilitated by Eric Collier as recounted in his book Three Against the Wilderness. Beaver furs were used to make clothing and top-hats. Much of the early exploration of North America was driven by the quest for this animal's fur. Native peoples and early settlers also ate this animal's meat. The current beaver population has been estimated to be 10 to 15 million; one estimate claims that there may at one time have been as many as 90 million.

Beavers fell trees for several reasons. They fell large mature trees, usually in strategic locations, to form the basis of a dam, but European beavers tend to use small diameter (<10 cm) trees for this purpose. Beavers fell small trees, especially young second-growth trees, for food. Broadleaved trees re-grow as a coppice, providing easy-to-reach stems and leaves for food in subsequent years. Ponds created by beavers can also kill some tree species by drowning but this creates standing dead wood, which is very important for a wide range of animals and plants.

Beaver dams are created as a protection against predators, such as coyotes, wolves and bears, and to provide easy access to food during winter. Beavers always work at night and are prolific builders, carrying mud and stones with their fore-paws and timber between their teeth. Because of this, destroying a beaver dam without removing the beavers is difficult, especially if the dam is downstream of an active lodge. Beavers can rebuild such primary dams overnight, though they may not defend secondary dams as vigorously. (Beavers may create a series of dams along a river.)

The ponds created by well-maintained dams help isolate the beavers' homes, their lodges, which are created from severed branches and mud. The beavers cover their lodges late every autumn with fresh mud, which freezes when the frost sets in. The mud becomes almost as hard as stone, and neither wolves nor wolverines can penetrate it.

The lodge has underwater entrances to make entry nearly impossible for any other animal (however, muskrats have been seen living inside beaver lodges with the beavers who made them).[citation needed] A very small amount of the lodge is actually used as a living area. Contrary to popular belief, beavers actually dig out their dens with underwater entrances after they finish building the dams and lodge structures. There are typically two dens within the lodge, one for drying off after exiting the water, and another, drier one where the family actually lives. 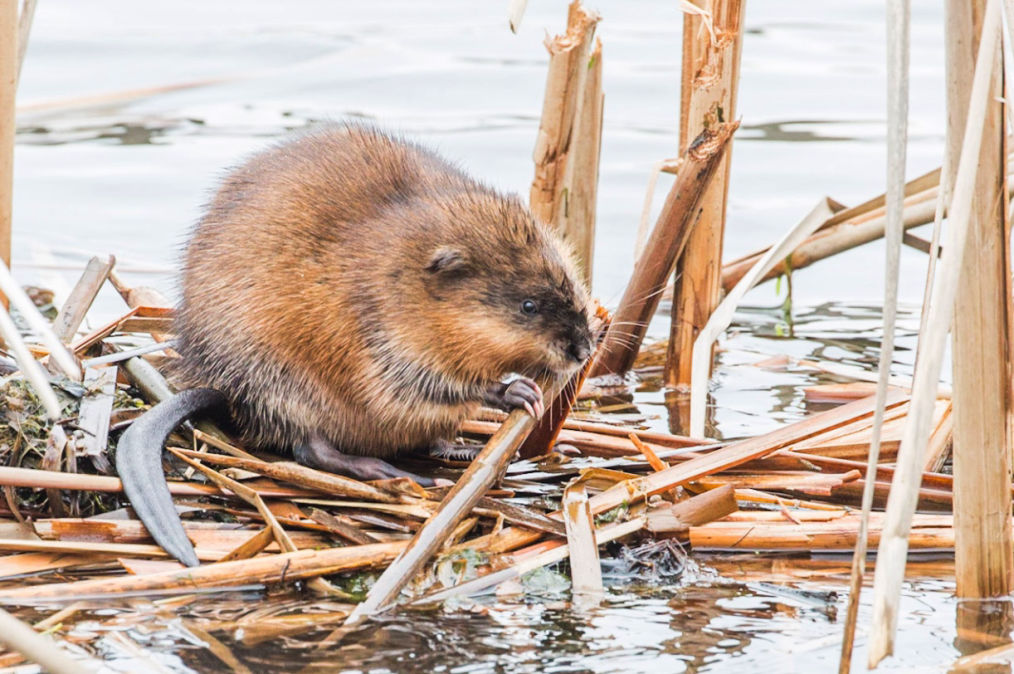 The muskrat (Ondatra zibethicus), the only species in genus Ondatra, is a medium-sized semi-aquatic rodent native to North America, and introduced in parts of Europe, Asia, and South America. The muskrat is found in wetlands and is a very successful animal over a wide range of climates and habitats. It plays an important role in nature and is a resource of food and fur for humans, as well as being an introduced species in much of its present range.

An adult muskrat is about 40 to 60 cm (16 to 24 inches) long, almost half of that tail, and weighs from 0.7 to 1.8 kg (1.5 to 4 lb). That is about four times the weight of the brown rat (Rattus norvegicus), though an adult muskrat is only slightly longer. Muskrats are much smaller than beavers (Castor canadensis), with whom they often share their habitat. Adult beavers weigh from 14 to 40 kg (30 to 88 lb). The nutria (Myocastor coypus) was introduced to North America from South America in the early twentieth century. It shares the muskrat's habitat but is larger, 5 to 10 kg (11 to 22 lb) and its tail is round, not flattened. It cannot endure as cold a climate as can the muskrat and beaver, and so has spread only in the southern part of their ranges in North America.

Muskrats are covered with short, thick fur which is medium to dark brown in color with the belly a bit lighter. The fur has two layers, which helps protect them from the cold water. They have long tails which are covered with scales rather than hair and are flattened vertically to aid them in swimming. When they walk on land the tail drags on the ground, which makes their tracks easy to recognize.

Muskrats spend much of their time in the water and are well suited for their semi-aquatic life, both in and out of water. Muskrats can swim under water for 12 to 17 minutes. Their bodies, like those of seals and whales, are less sensitive to the buildup of carbon dioxide than those of most other mammals. They can close off their ears to keep the water out. Their hind feet are semi-webbed, although in swimming the tail is their main means of propulsion. While most muskrats have brown fur, some with reddish brown, a black muskrat variety lives in the New Jersey and Virginia region. Its fur is nearly black, with light gray under belly. Most of these muskrats inhabit marshes near salt water, although some have been trapped in fresh water lakes.

Muskrats, like most rodents, are prolific breeders. Females can have 2 to 3 litters a year of 6 to 8 young each. The babies are born small and hairless and weigh only about 22 grams (0.8 oz). In southern environments young muskrats mature in 6 months, while in colder northern environments it takes about a year. Muskrat populations appear to go through a regular pattern of rise and dramatic decline spread over a 6 to 10 year period. Some other rodents, including famously the muskrat's close relatives the lemmings, go through the same type of population changes. 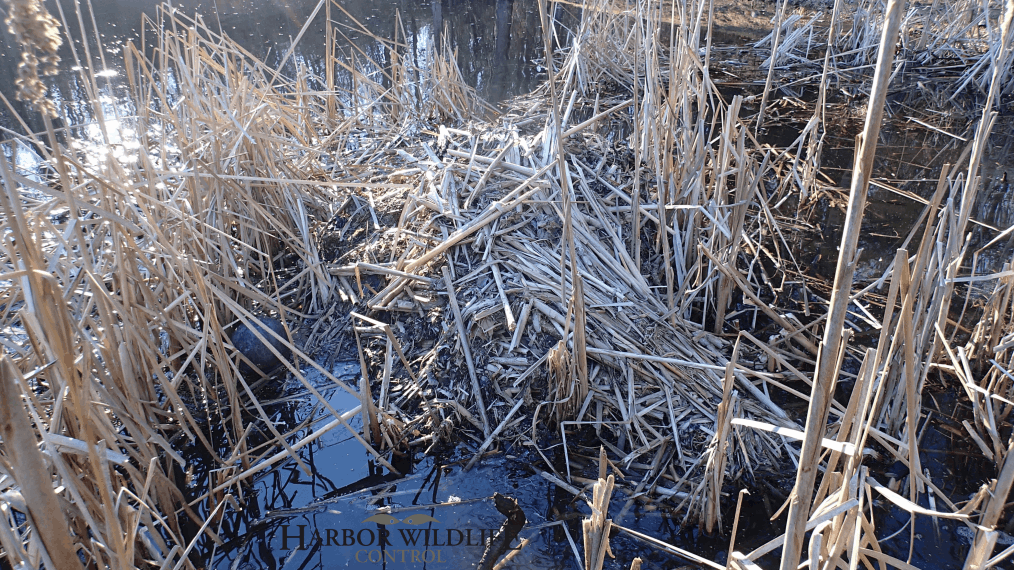 Most muskrat damage is caused by their burrowing. They burrow into earthen dams, dikes, levees, and railway embankments, weakening their structures. They also burrow into the banks of ponds, canals, and irrigation and drainage ditches. Their tunnels may drain a small farm pond. They may damage swimming pools, floating docks, marinas, and boathouses. Muskrats will cross yards. Some people are frightened of them, or mistake them for Norway rats.

Occasionally eat field crops. May cause substantial financial losses in states with major rice and aquaculture operations, because they eat rice, cut it down to use as building material for their lodges, and damage the field by burrowing through levees.

Damage aquaculture sites by burrowing into levees or pond banks.
Damage ornamental aquatic gardens by eating water lilies or cattails or other plants.

When their populations grow too high, they may "eat out" all of the aquatic plants in the area, reducing the quality of the habitat for other species, such as waterfowl.