Bird droppings and nesting materials which are allowed to accumulate pose a host of physical problems which can become very serious if they are not corrected immediately.

They are often a nuisance in urban areas like manufacturing and food processing plants. Gutters and drainage pipes clogged with sparrow nests can backup and cause extensive water damage and fires have been attributed to electrical shorts casued by machinery housing sparrow nests. Lastly, feces buildup can lead to structural damage from the uric acid in droppings, plus the bacteria, fungal agents and parasites in the feces also pose a health risk.

They can carry diseases that are transmissible to livestock and to people, including TGE (transmissible gastroenteritis - a disease of swine), blastomycosis, and samonella. One study found that European Starling droppings contained C. jejuni, L. monocytogenes and C. psittaci, all human bacterial pathogens. The study concluded however, that starling droppings were not a significant source of human infection (Gautsch et al. 2000). In the United States, starling droppings provide a growth medium for Histoplasma capsulatum, the fungus that causes histoplasmosis in humans. All of these examples indicate that the spread of disease by starlings to humans and livestock is a potential threat. Spread of disease among wildlife is another facet of this problem.

Nests and droppings will quickly make a mess of any nesting area. Pigeons are particularly fond of roof spaces, many of which accommodate water tanks, though they frequently seem to fall into the tanks and drown. Any water tank or cistern in a roof space needs to have a secure lid for this reason. The popularity of a nesting area seems little affected if pigeons die or are killed there; corpses are seen among live birds, who seem unconcerned.

On undamaged property the gutters, window air conditioners (especially empty air conditioner containment boxes), chimney pots and external ledges will be used as nesting sites. Many building owners attempt to limit roosting by using bird control spikes and netting to cover ledges and resting places on the façades of buildings. These probably have little effect on the size of pigeon populations, but can help to reduce the accumulation of droppings on and around an individual building.

The bird’s pecking (also called drumming or drilling) commonly damages buildings (wood siding, shingles, trim, and eaves are at particular risk), telephone poles, and fences. Because they are a forest dwelling bird, woodpeckers prefer to drill holes in wood (they especially love pecking cedar siding) but can also damage stucco, Dryvit, and other building materials. Not all woodpecker problems involve property damage. The sound of woodpecker drumming can also be quite a nuisance, especially in the early morning when people are trying to sleep. 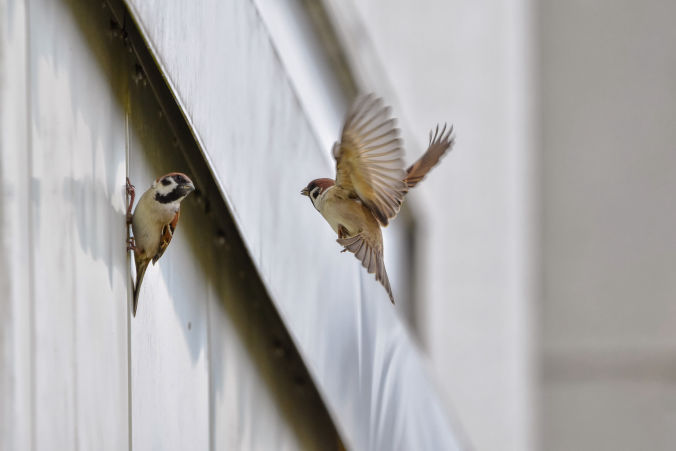 The House sparrow is the number two urban pest bird. Introduced as a species to North America, the house sparrow quickly spread across the country due to its lack of natural enemies and its adaptive traits. Its ability to nest in urban structures, eat urban scraps and a large breeding capacity are some of these adaptive traits.

The House Sparrow is actually a member of the weaverbird family and not a true Sparrow. Weaverbirds create intricate nests and relative to their size, the largest nests in the bird world. Their legs and toes are favored for branch perching and their short conical bills are ideal for seed cracking. Their diet consists of seeds and grain, as well as fruits, vegetables, human table scraps and insects. They are boisterous, intelligent birds who roost in noisy flocks on branches of city trees, ivy covered walls and under eaves of houses.

European starlings are an invasive pest species introduced to the United States in 1890. Rumor has it that one hundred starlings were released in Central Park in hopes that all of the birds mentioned in Shakespeare's works would become established in the New World. In the case of the starling, the wish became reality. In the intervening hundred years the starling population has grown to an estimated 150-200 million birds.

They are small black birds with an iridescent green and purple gloss on their feathers. The tips of the feathers are cream colored and create a characteristic "flecking" effect. In winter these pale tips erode away exposing the deep purple gloss on the nape, cheeks and throat of the breeding male. During the winter the male also develops elongated breeding plumage on his breast. His back, flanks and rump become a deep iridescent green. 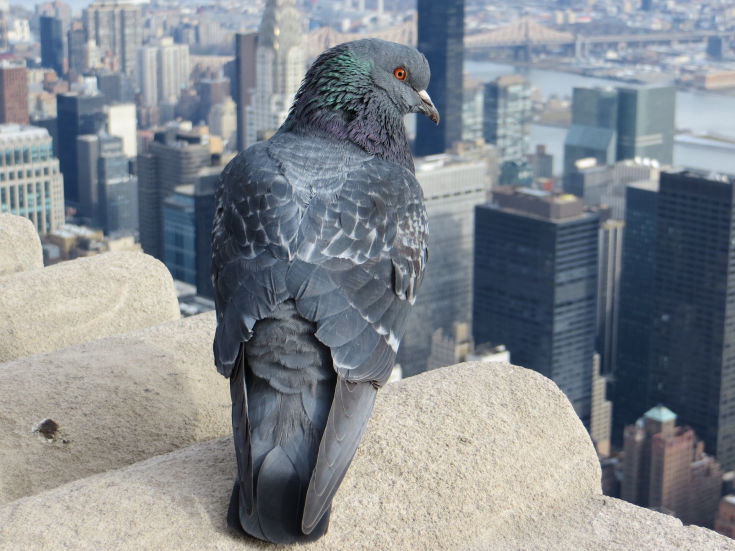 Pigeons, also called rock doves, city doves, city pigeons or street pigeons, are derived from domestic pigeons that have returned to the wild. The domestic pigeon was originally bred from the wild Rock Pigeon, which naturally inhabits sea-cliffs and mountains. All three types readily interbreed. Pigeons find the ledges of buildings to be a substitute for sea cliffs, and have become adapted to urban life and are abundant in towns and cities all over the world.

Nests are rudimentary as for the wild doves and pigeons. Favorite nesting areas are in damaged property. Mass nesting is common with dozens of birds sharing a building. Loose tiles and broken windows give pigeons access; they are remarkably good at spotting when new access points become available, for example after strong winds cause property damage. 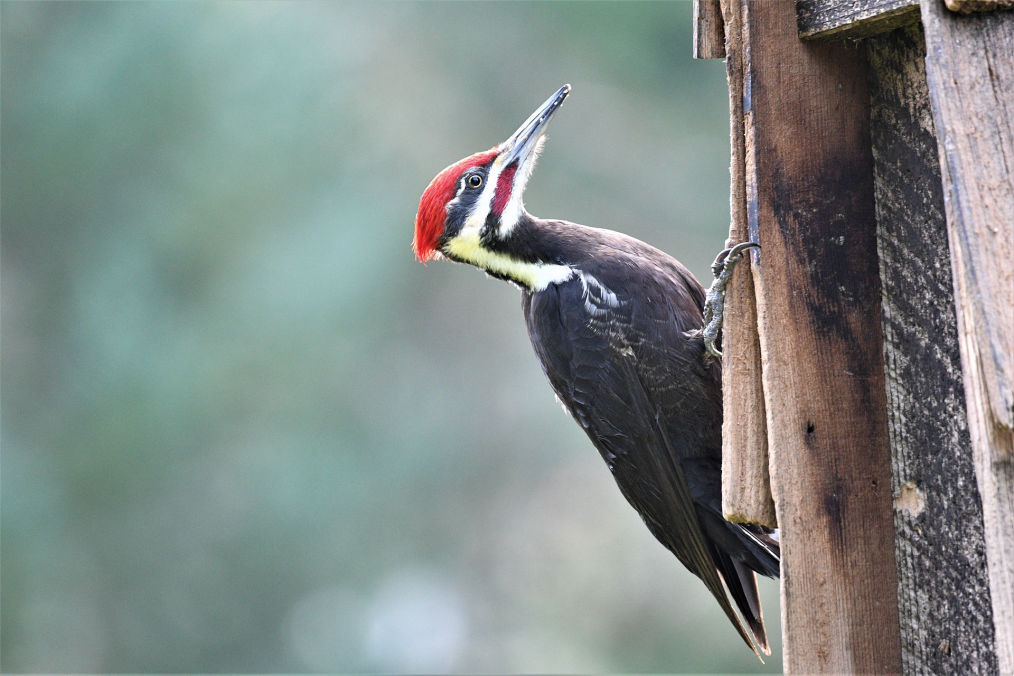 There are over 200 different species of woodpeckers worldwide, and approximately 23 of those can be found in the United States. Members of this family are chiefly known for their characteristic behavior. They mostly forage for insect prey on the trunks and branches of trees, and often communicate by drumming with their beak, producing a reverberatory sound that can be heard at some distance. They are a protected species.

Some species vary their diet with fruits, birds' eggs, small animals, tree sap, human scraps, and carrion. They mostly nest and roost in holes that they excavate in tree trunks, and their abandoned holes are of importance to other cavity-nesting birds. They sometimes come into conflict with humans when they make holes in buildings or feed on fruit crops, but perform a useful service by their removal of insect pests on trees.